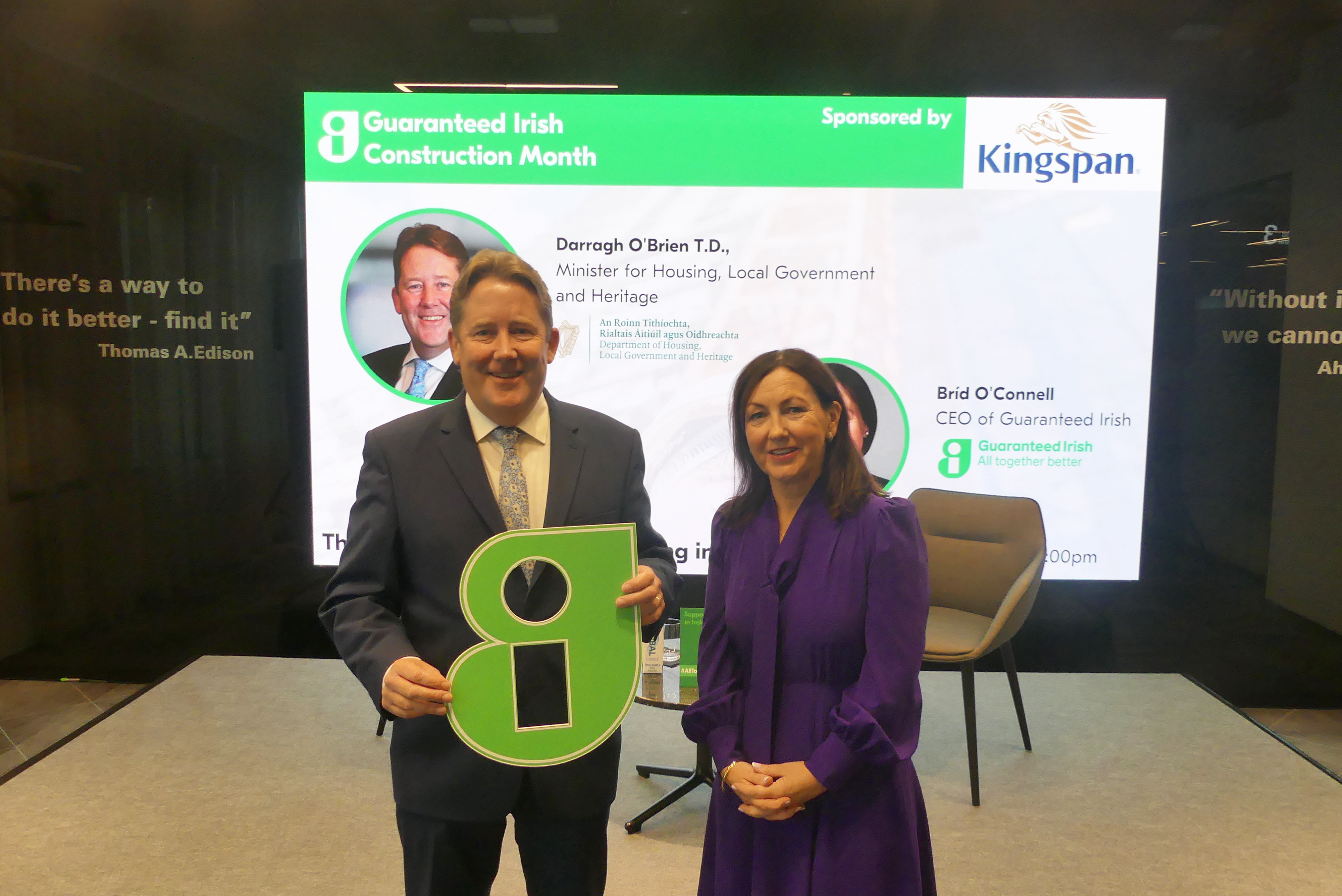 Friday September 30th, 2022: The Annual Guaranteed Irish Construction Forum, sponsored by Kingspan Insulation, took place at the KPMG global innovation hub known as Platform X in Dublin’s IFSC. The event featured a discussion with Minister for Housing, Local Government and Heritage Darragh O'Brien, TD. The tech hub was filled with construction sector business representatives from across the country who were eager for a moment with the Minister on the back of Tuesday’s widely anticipated Budget 2023.

With the Housing Budget announcement that a total of €4.5billion will be allocated to the Department of Housing for 2023, those in attendance at the construction sector event, which included Kingspan Insulation, Combilift, Wavin, Etex Ireland and Construction Industry Federation (CIF) Director General Tom Parlon, were keen to put their questions to the Minister.

The discussion topics included the increasing construction costs, the demand and supply of modular and timber frame homes as part of the Housing for All plan, the delivery of 500,000 retrofit homes by 2030 as part of Government’s Climate Action Plan, and the need for a review of the National Planning Framework.

The Housing Minister Darragh O’Brien said, “housing remains a key priority for the Government…significant progress is being seen after a decade of under supply.” With a capital budget of €4.5 billion allocated for social and affordable housing, the Help to Buy Scheme being extended until the end of 2024, and the renewal of the tax credit for renters worth €500 per year, construction representatives commended the Minister for the work being done as part of Housing for All plan.

The Minister also commented on the new Vacant Homes Tax which is set to “increase the supply of homes for rent or purchase to meet demand.” The tax will apply to residential properties which are occupied for less than 30 days in a 12-month period.

In the area of planning, the Minister said, “there are too many incidences where planning permission is being overturned on small technicalities.” With 24 additional Planners being recruited on the Board and more at local authority level and a review of planning currently underway, the Minister will be “bringing a consolidated plan…a piece of legislation to Government before the end of the year…to deal with the anomalies that there are…to make the system more efficient.”

Construction representatives expressed their concerns in relation to the timing and cost to the industry of the proposed levy on concrete blocks, with increased construction costs of up to €2,500 on an average home. The Minister said while he understood the concerns raised on the proposed levy, the Government have had to “step in to support homeowners with homes affected by MICA and pyrite to help fund the redress schemes.”

The Minister disputed that now was a bad time to introduce the levy given the rising costs of materials, stating that some of the estimations from the Department of Finance shows a small increase in costs of about 0.4 – 0.9%. “I do believe it’s important the sector make a contribution,” he said, adding that the largest contributor by far to the redress scheme will be the Exchequer. The levy is expected to raise €80 million annually and it will be applied from 3 April 2023 at a rate of 10%.

The Minister acknowledged the important role of the Guaranteed Irish House initiative in facilitating business between locally based construction businesses with “the shared ambition of working together to shorten supply chains and reduce our carbon footprint.” The Minister said supports would be made available where possible to the GuaranteedIrishHouse.ie campaign by Government to encourage the use of locally sourced building materials across the sector.